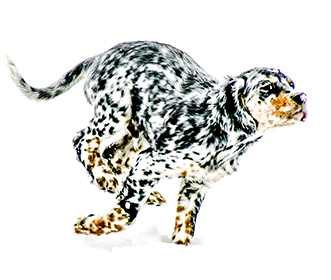 Biting and mouthing are very normal puppy behaviors, however rude and ill-mannered it seems. Dogs don’t have hands so they investigate everything with their mouths. Playing and play fighting is also very normal. Litter mates play by biting—and this play can get very rough—but it is all playing. This is how developmental skills, physical coordination, and even social skills are acquired and is how the order of the pack is set. This is also how bite-inhibition is learned. When a pup play-bites a littermate or its mother and they yelp, growl, or leave the scene, they learn how hard or soft of a bite is acceptable.

Usually by now–or very soon–the “puppy license” expires and your older dog will no longer tolerate pup’s obnoxious behavior and put him in his place quite harshly. Older dogs typically won’t put up with too much, especially if pup is actually biting and the bites hurt. Pups that leave for their new homes earlier rather than a few days or weeks later tend to have not learned this. In my experience, a few days or a week or so longer and the mother or even other dogs at the breeder’s facility would have corrected this rude behavior quickly. Still, pup can quickly forget in a new home and will try to push the limits especially if no one is telling him not to.

Ultimately, you are the pack leader and you must teach the pup this nagging behavior is not acceptable. If the older dog is just taking it and not setting pup in his place, you may need to intervene. Step between the two and tell pup no.  Distract pup with a toy, another activity, or remove him completely from the room. This could take a lot of getting up and removing pup from the room, but he’ll eventually get it.

Make sure pup is getting enough exercise—tired pups are less likely to have the energy to incessantly pick on another dog. Take pup for a long walk, have a session of playing fetch, etc., before bringing pup inside with the older dog. Another suggestion is to begin some type of obedience training—pup likely needs more mental stimulation to tire him out. Pups can play for hours it seems, but 15-30 minutes of actual “work” that mentally stimulates pup and he’s down for a long nap. If there is a certain time of day pup does this more than others, try to get ahead of the game and plan his walks or short training/working sessions beforehand.

In my experience, consistent exercise, obedience work, and a bit of leadership and intervention on your part, the pup should quickly learn some manners and you’ll have a happy household and both pup and older dog will be best buds.