Mohawk’s owner sent an update so I thought I would share. 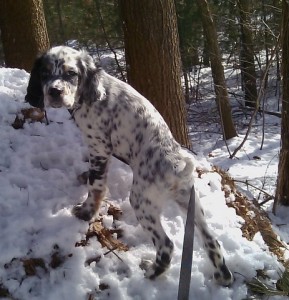 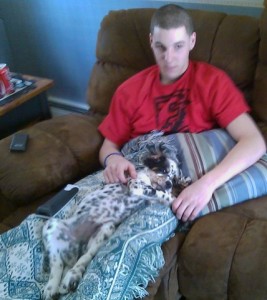 Attached is an MP4 file from last weeks romp in the forest fields [near here]. The fields have pheasant and quail in them during hunting season so Magnum is learning the terrain already. The Pic’s are on the compost pile out back and in my sons lap. Gad this guy can run…..It only took one week for me to realize even at his size and age I wasn’t going to catch him if he didn’t want me to, and […] I still run pretty well. In contrast he will snuggle with anyone of us at night on the couch…..really an affectionate little bugger. He’s been curling up with my T-shirt in his crate and is sleeping through the night….. mostly.

I can see why the boys are not letting up on you…….I’ve never seen a dog with drive like this one minute, while so attached to family the next. I thought my labs were the most sincere dogs on earth…ya no, really could sense your every mood and respond, but Magnum has drive and then some with the family side I don’t recall with my labs…think I’ll keep him. 🙂