Just some photos of some of the gals this afternoon.

You might wonder why there are always pictures of the same dogs and not more of the boys. It’s because I mostly take the photos during the afternoon/evening run/feeding and that is when I let the girls out first. They run while I take care of kennels and get the food ready. I then go out and play with them and sometimes take pictures until they are ready to eat.

By the time I get that part done, it’s time to start on the rest of the gang down at the barn. I don’t let all the boys out together anymore because when girls are in heat, the boys don’t always get along. And, it seems  I just about always have a gal in heat. I don’t want my boys in a tiff that I have to break up, although it’s usually more posturing and squaring off, I can’t have any of my boys getting hurt.

Girls in heat are usually let out alone, too. At times, they also get a bit cranky and tiffs break out among the girls. I just avoid any dog getting hurt and don’t let them out together when these situations arise.

Anyway, often by the time I get to the boys, the lens on the camera has frozen and I am either working on cleaning a kennel or brushing/grooming another dog while another is out.

In the morning, it is opposite–I run and feed the boys first. But during the winter months it’s too cold and usually still too dark for the camera.

Just in case you were wondering…

Which you probably weren’t…

So… we are just waiting for signs of spring….

but mostly for the return of the magnificent little Woodcock.

They wouldn’t be able to find any worms here now, that’s for sure.

The Skydancers were here last year at this time.

Quite a contrast to the highs maybe in the 30s we are having this year.

But, the Llews and I are still enjoying the snow very much.

I’m glad they are rolling in snow instead of mud, that’s for sure!

In other news, I hear the boys training in Florida are doing fantastic.

I hear there are lots of great photos of them from the training sessions, but there is no Internet service, so I’ll get the photos and share them when I am able.

They will be heading north-west in a few days with several stops along the way for the dogs to show off their stuff.

I’ve had phone and e-mail problems this past week or so. I’ve heard of messages sent and voice mail left but I have never received them!? Not sure what is going on, but if you have called or written, please try again.

Addie is in blazing heat.

Nashua has started her heat, too. 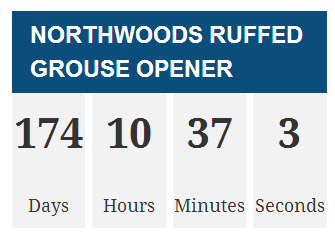 I’ve started a new counter… see it over there on the right-hand sidebar near the top of the page? It’s the countdown to the Ruffed Grouse Opener in the Northwoods (Sept. 15th). 174 days… I can’t freaking wait!

Also, just for kicks, I’ve been running a live web cam out the window. You can’t really see much, just the barn and field. Sometimes, I’m sure you’ll get to see the Llews running by. Sometimes you can just see all the tweetie birds at the deck feeders. Mostly you will just be able to see what it looks like here. YAWN. Boring, I imagine. Just something to do I guess…

Scott… well, he is coming along healing from his surgery, although still quite painful if he tries to do much. And he is going a bit insane waiting for ice-out. Not sure if that will come soon. Most of the UP has 5′ of snow on the ground. It will eventually melt, honey. But then the bugs will come. Please don’t wish it too much, okay?

Okay, off to take this brilliant puppy Cowboy and the amazing Allie for a fun run before dark, then back to workie.

Hope everyone had a great weekend!