It is the middle of the night (4 am and lots of folks would be getting up now) and I was attempting to sleep a bit but can’t. My head is swimming with thoughts, things to do tomorrow, next week, next month, etc. Do you do that? My gosh, at times I really wish I could just hit the power button.

I am thinking about Grace and Ellie and that I need to get up in a few hours so I can start them on their first puppy mash. It doesn’t matter what time of day it is, though, I could do that in the evening at dinner time.  That’s fine.  I can guess I won’t be getting up very early at this point. And can really do nothing else but work in order to make deadlines for Monday morning. Ugh. Why can’t I do more faster? My stomach is furious at the moment and I just realized there wasn’t a chance to eat–well cook, actually and everything here to eat needs to be cooked first. Nothing quick.

I just remembered that tomorrow (today) is my dad’s birthday! I remembered all week, but forgot today and just remembered. And, I don’t have a gift, yet. I have a great idea for something, which is the biggest part because I find it more and more difficult to come up with great ideas for gifts for him. It has to be special. Meaningful. Useful. You know? But, I think I found something and I will order as soon as I am able. It is a very cool leather bag with a 100-year guarantee–what do you think? I know I want all models from the Saddleback Leather Company! I think one will be very useful to him for either gun stuff, ammo, tools in the truck, etc. I hope he loves it!

All I can think about lately is when I could pull off leaving for the north country this year. I don’t want to wait until September! I really am hoping for an August training in the Northwest, then a week or so of hunting there, and then making the trek back to the Northwoods by mid-September. We’ll see.  I would have to skip some litters. I would disappoint many people. Unless I could plan things to have the litters with me.  The most important thing is the health and safety of all.  If I just went north, that is not a problem as I easily have the appropriate needs there. I don’t know. We’ll see.

Next, I am thinking about everything I want to do with the dog trailer before the next trip. I wish I had construction skills. I have a wee bit, but not what it takes to do what I want. And everyone else is too busy with other things more important to them. I will just have to do research and figure it out! I also want to construct several new chain gang sets. And a huge canvas tent project… on and on…  Perhaps I’ll not be ready to leave at all until at least September at this rate.

Another thing that I have been distracted by over the past few weeks are all the dog sled races going on. I’ve always had a fascination for the sport. I suppose the combination of snow and dogs is a perfect fit for me. I’ve never had a husky-type dog, unless you count the Akita pup I had for about 3 weeks before it was stolen from the front yard when I was a much younger gal, but I love the desire the sled dogs have for working and that team spirit. The thought of being in the wilderness of Alaska or the Yukon, in the snow, with a beautiful working team of canines, just makes my heart race. The Iditarod race has always been some sort of strange fantasy. I’ve only ever been on a dog sled once (and what a thrill!), but all my life I’ve been drawn to the sport and race. Who knows, maybe when I move to the Northwoods for good, I’ll give mushing a try. Do you think the Llews could do it? Could you see that? Racing through the wilderness of Alaska and an entire team of Llews slam on point on some Ptarmigan? Ha! What a hoot. I was just reminded by a reader that Robert Wehle had his Elhew sled dog team with which he competed and won races, so surely a team of shags can do it too!  Here is a photo from his book, Wing and Shot: 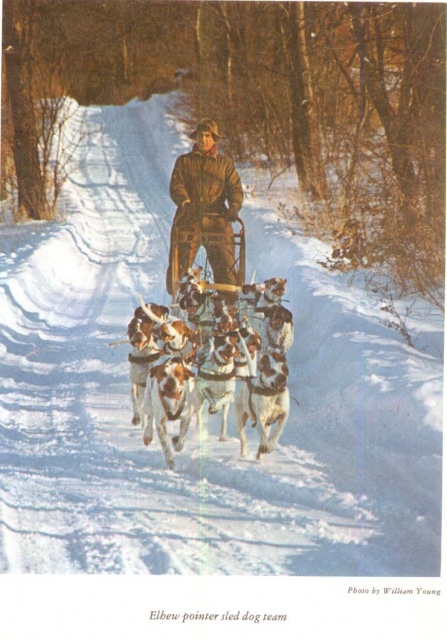 I can never give up my Llews, and the time of year we are working and hunting the most is the same time a musher would be training their team. It wouldn’t work.  By the time I would ever decide to scale back with my Llewellins will only be when I am too old and feeble to care for them properly, and that certainly won’t be a time in my life to start a sled dog team and run the Iditarod! Maybe they will have a senior division by then? Or perhaps when I do make it north, I can have a Llewellin team–at least it would be a fun way to keep them conditioned!

Anyway, it’s a blast to read about the dog sled teams and races and follow all the exciting news about the Iditarod on their Web site. The Yukon Quest was two weekends ago, the Jr. Iditarod is this weekend and the Iditarod race begins next weekend. There have also been races in the Upper Peninsula to keep tabs on. How exciting! Maybe I will stop at the library this week and grab a good book on the subject, written by someone that has run the “Superbowl” of dog sledding races. On second thought, no, I won’t do that. It would just be added to the stacks of books currently taking up my nightstand and bed that I am longing to devour. Maybe at some point I can volunteer to be a helper for a race and get to watch the dogs and racers. Or maybe someday I will really actually race. For now, I think I will stream the movie, Iditarod: The Toughest Race on Earth, on Netflix for the hundredth time!

Okay, it is now 5:00 am. I have to try to sleep. No, it didn’t take me an hour to write this, but I kept getting distracted by laundry duties and then thought I had better put more wood on the fire… and bring more in… then Shay wanted out… then… oh my–good night (morning)!