I love the bird dog world. I love working and training dogs and I love puppy rearing and training. I wish with all of me I could do it full-time. I’m sure I am not the only one that feels this way–who wouldn’t want to? But, we all realize there is this thing called reality and the other thing–jobs.

So, here it is almost 3 months since much of any training of any sort has gone on around here. We return from fall bird camp,  try to catch up, try to make up with family members we haven’t seen for months, then along come the holidays. Then comes deer season. That is finally over with, the second season opens, then we get several feet of snow. I love snow–prefer it to just about anything else–but, you just can’t hunt in too much of it.

So, here I am faced with the reality that my poor dogs haven’t been worked for about 3 months! They get out at least twice daily to run our 1-acre fenced-in yard, but they haven’t been out to the woods and fields much. It will all fall back into place naturally for the older, seasoned dogs, but I have many young dogs that need a lot of work. There was no excuse not to work on at least some manners, basic yard work, and the like. And the dogs, no matter their age, have incredible natural instincts for bird finding, naturally quartering, etc. But, they need the opportunities given to them to become experienced in all situations. The only way they get this experience is, of course, to experience it.

An example: Today we ran a few younger dogs for some folks. It went fairly well. I ran the now, 9-month old Kohl. I really, really like this dog. He is very stylish, uses his nose well… he’ll be a good dog. He is built very nicely and reminds me a lot of his sire, Brier. He is all-black. He listens very well and is exceptionally bright. He worked a very comfortable range and had a nice run. 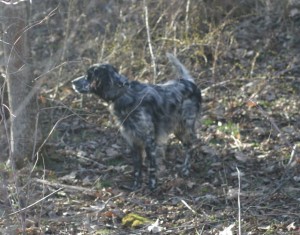 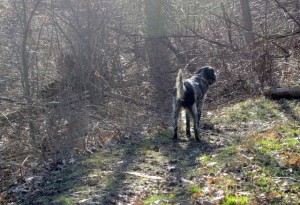 Then, we ran Ranger, who also did quite well. Ranger is from the same breeding, but a different litter. He is now, 16 months. He is very fast and zippy. He covers the woods wisely and has a lot more confidence than Kohl has yet (but that will come for Kohl with experience). Ranger covered ground quickly and smartly. He responded to commands. He had a nice run–no birds, either, though. Not their fault–I should have scouted the area better beforehand. I just wanted to take clients to a good spot and not crowded with lots of people getting out on the Game lands. 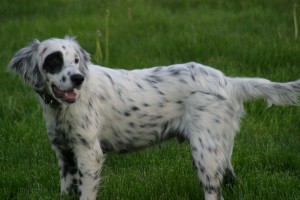 Little (who is not so little anymore) Ben, tagged along and did a great job. He had a blast working the woods. He didn’t do too bad trying to keep up with Kohl, but there was no way he could keep up with Ranger. He worked very nicely, was very curious and bold, handled obstacles wisely, and was very alert to some birds flying high overhead. He did great! What a gem this fellow is!

Then, I ran my man, one of my favorites… Strangely, he did not work as he usually does for me. I kept thinking, what is wrong with this dog? Is it too hot out? Naa… it’s not that warm. Is there a scent that is worrying him (like a black bear around)? He worked, but seemed more interested in our company and sticking close than getting down to the business of hunting. It then occurred to me–I have spent a lot of time with this dog–alone.  Now, not that that would usually be a problem, but this dog is a very social dog and while very driven for the hunt, this was a new situation for him. He decided to stick around and visit his new admirers–he thought this is what he should do! I’m sure if he would have seen any birds lately, he would have been more driven to hunt, too.  And he hunted, just fine, but not like he usually does.

I’ve actually maybe spent too much time with him alone?  Normally a dog adjusts just fine to this and I am certain he would have if we would have spent just a little more time out with him.  He actually did excellent just a few hours later. I was determined, after the guests left, to figure out why he acted as he did. I took him out again, working in the same cover-type situation, but I was alone with him. He worked like a dream at the range I am accustomed to him working. He even had 2 beautiful points on grouse. It was a spectacular end to the day but made me realize that I may have created a bit of a problem with this dog in that I have not put him into other situations earlier.

I prefer to work young dogs alone for at least their first season so that I can control the situation and concentrate on the dog. But I may have gone a little too long with this dog. He will be fine and as said, I’m sure if we would have given it a little more time, he would have figured out we were out to hunt as usual and one person or a half-dozen people makes no difference, he has a job to do.

My only other thought was that I have been the sole person to work this dog. When Scott has him out–it is just for fun in the yard. So, was this dog confused by who was controlling him? Really just a handful of people around should make no difference what-so-ever.  Was it that Scott was there and he wanted to work for Scott?  I don’t know. I have no idea why there was such a difference in the way he worked at that time in that place and then worked as his usual range and speed alone with me, just 2 hours later. I am still pondering the situation.

Today also reminded me that I need to spend at least a little time getting back to some basic yard work and obedience commands. Ranger and Kohl seemed to forget how to behave on a lead and they were so pumped to get to run they certainly did not eagerly return to their box on the “kennel” command as they normally would have. So, we have some work to do and I look forward to it. I really love working the dogs.

So, here we go with a litter on the way, lots of dog work to do,  tax season is here. There is tons of work to do on the house, property, and kennels. Gardening will begin. Scott’s business will start again… there is lots to keep us busy! My favorite part is of course the puppies and working the dogs.