Okay, let’s see… where were we?

The past week has zoomed by. I barely know where to begin.

Orion flew off to his new home Saturday. It was a very big adjustment for me without him. He’s doing just fine, though. 😉 He was so much fun and such a good boy. Miss you, baby…

Meanwhile, Maddie and Doc’s puppies are bursting at the seams! I think I’ve mentioned they are into everything.

Like this morning, I was trying to clean the kitchen, which is pretty much impossible to do while the puppies are awake. Nope, no way to sweep the spilled puppy kibble–which one little squibber spills on purpose–or even think about scooping and mopping the other room. Forget about it. Let them play and when and if they fall asleep, tip-toe in and try to clean and do it in about 2 minutes because somehow they sense the movement of their favorite thing to chase and attack–a broom or mop.

Anyway, I had put their bowl of kibble on the counter when I thought I was going to clean. I forgot to put it back down. Later, I hear puppies crying and whining and carrying on. I take a break from work and go out to see what’s wrong and there they are–three of them are trying to get on top of the puppy crate. One was already on the top of the crate stretched up trying to reach the counter where the bowl of kibble was! They were hungry and knew where their food was. WOW. So, I fed the poor, starving babies their lunch and relocated the crates a bit. I can’t believe how smart they are. Great noses. And, their desire to get what they wanted. Little ***ts!

Next, not a warm day by any stretch of the imagination, but the sun was shining and these puppies want out. They are no longer content running from the kitchen to the puppy room and there is nothing fun (that they can reach anyway… especially now that they’ve pulled down all the curtains that I foolishly hung on the porch windows. I really do know better, but hey, it is frigid and I was trying to keep it warm in here). If I don’t take them out, I think they will break out! They’ve been out on the deck, but that just isn’t cutting it, either. At least they like to “go” on the deck… not sure what is easier to clean up–frozen deposits seemingly stuck forever to the deck or the stuff in the puppy room.

So, I decide to take another break… they talked me into it… I put on all my gear, grab the camera and out we go. I open the gate and they were gone! They are 7 weeks old, after all. Eight degrees or not–and tomorrow will be a whooping 24 below or something until at least noon–they need out to explore. And oh my, what fun they had! They are not afraid of a thing. Oh my. First time off the deck and they take off like they’ve done it 100 times. It was like I let them out of jail. They were running and chasing and smelling and exploring everything. One this way, one that way. They scattered in seconds and were having a ball.

Timber decides the snow is too deep in the yard and decides to climb a bush. Yep, he uses his head and neck and pulls/pushes himself up and up the branches… then gets stuck… cries… and falls (don’t worry, it’s only inches off the ground and he falls into snow… and, I was there watching him figure out how to climb). 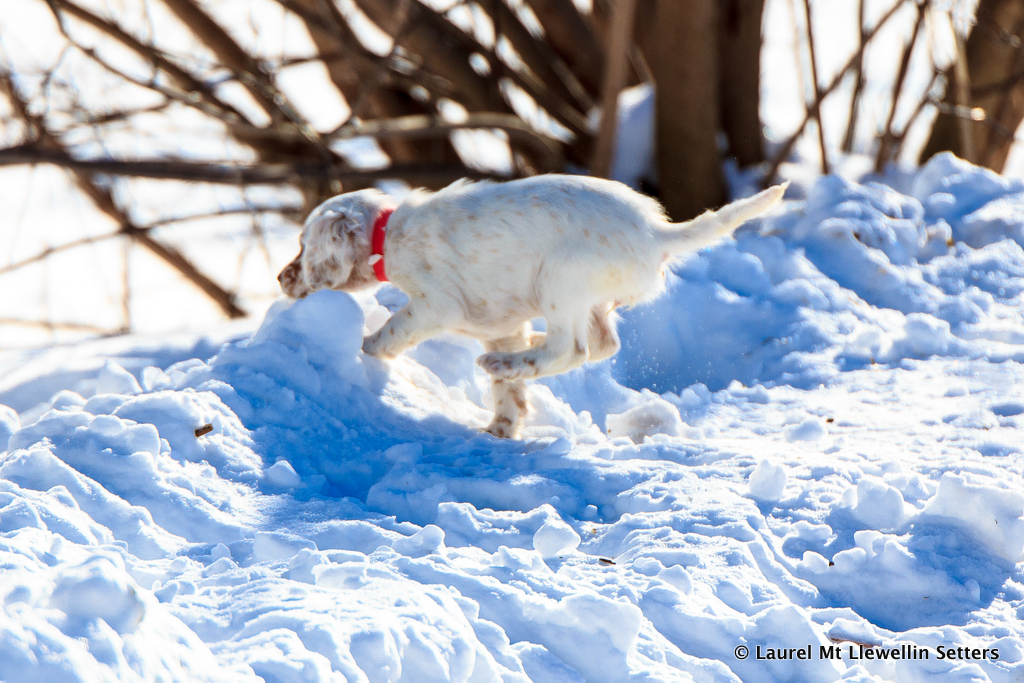 They were something else!

They were out much longer than I thought they would be and had a blast exploring. I had a hard time keeping track of 8 almost all white puppies in the white frozen world. They wanted nothing to do with going back in the dumb, boring kitchen… except… okay, maybe that heater does feel pretty good.

I had to search for three of the squibbers and bring them inside. They were not happy with me at all. Mad as hornets that I dare bring them in!
They were finally in, warm and dry, and down for a nice, long, afternoon nap after such a big play outside.

Or so I thought…

So, out I went for the afternoon feeding and exercise of the older dogs. Since I had all my warm gear on.

Addie darling looking quite large from this angle. About two weeks to go!

Maddie stayed out to oversee the chores. She keeps everyone in line. I love this picture and how the light really shows off her red-almost looking purple in this winter light. Gorgeous, I think.

So, with round 2 accomplished, back in I go. Maybe I can make something to eat and get back to work.

In I go to discover the sooo sleepy puppies were not so.

And somehow had retrieved the Puppy Cam from the table.

I found the little tripod in several pieces on the floor.

And the camera in the puppy room…

um… covered in some you-know-what.

I have to order another.

Sorry folks that are trying to watch the Puppy Cam.

And, that’s all for tonight.

Hug your Llew & keep each other warm.