It’s been several days of lots of transitions. Puppies leaving, a pup staying longer, other puppies moving to new digs. Things are always eventful around here!

Where do I start?

Quin Flies off to Boston

First, we went from 4 pups to 2 Sunday. And then, yesterday, Quin puppy flew off to Boston.

Leaving in the morning to make the drive to the airport didn’t seem too promising at first. But, we made it and after waiting a bit to see if an ice storm in Chicago would effect his flight, all was a go. Quin made it safely to Boston without a hitch. His new family is very happy.

Orion Moves into the Mix

Back at the farm, poor Orion was all by himself in the kitchen. He was doing just fine, but I desperately needed to get the room ready and move Maddie’s puppies who have been living in my bedroom. A nice, warm room for them, but they are escaping the whelping box, are ready and need to explore and doing so on the bedroom carpet just isn’t the best situation (for me). 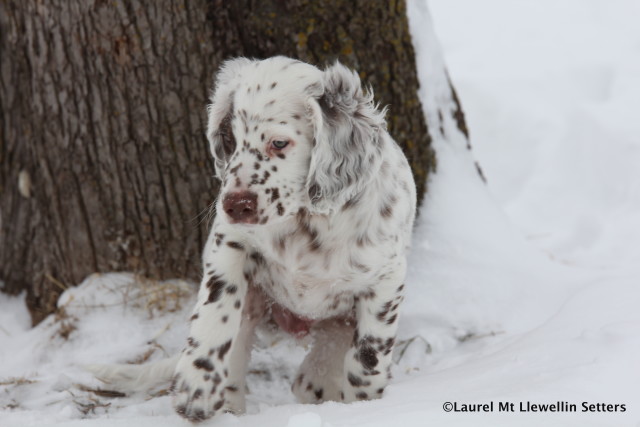 Orion will be staying for a few more weeks until his new family in California can take him, so I had to just bring him into the main living area of the house so I could move Maddie’s pups to the kitchen where they can begin potty training, etc. It was an eventful evening, after an already very long day of the early-morning, preflight preparations, then the nail-bitting drive in the snow to the airport and back, chores, and now a wound-up sweetie-pie puppy that needs my attention. The gals were not in the mood for an exuberant puppy—and exuberant he was! Poor guy, he just wanted to play! Where did his brother go? No one wanted to play or tolerate him. So, we had several hours of learning… learning not to eat remotes or charging cords. He did get one remote. My fault for not puppy-proofing before bringing the little guy into the living room!

We learned all about the wood stove and the stack of firewood. We learned not to drink mom’s coffee, please… We learned how to get up on the sofa and the harder part of getting off the sofa. The big girls make it look so easy! We learned not to pull all mum’s paperwork off the desk. Not to knock over the trash can under mum’s desk… pens are not good to chew on… neither are boots, gloves, or hats…  😉 Needless to say, I only had the kitchen puppy-proofed. I tried to counter all the aaahhhhs with things the poor fellow was allowed to do or allowed to play with. The girls just growled at him, took his toys, and ate his food. No one wanted to play, except with his toys. So, at midnight, I was outside playing with him in the dark while it was snowing. I tried to tire him out or at the least, give the sweetie-pie some fun.

I moved a crate into the living room for him, which doubled nicely as a desk for me. Orion kenneled like a perfect boy while I set up the computer on top. I think I got through 2 e-mail responses, never did work, and just couldn’t keep my peeps open. 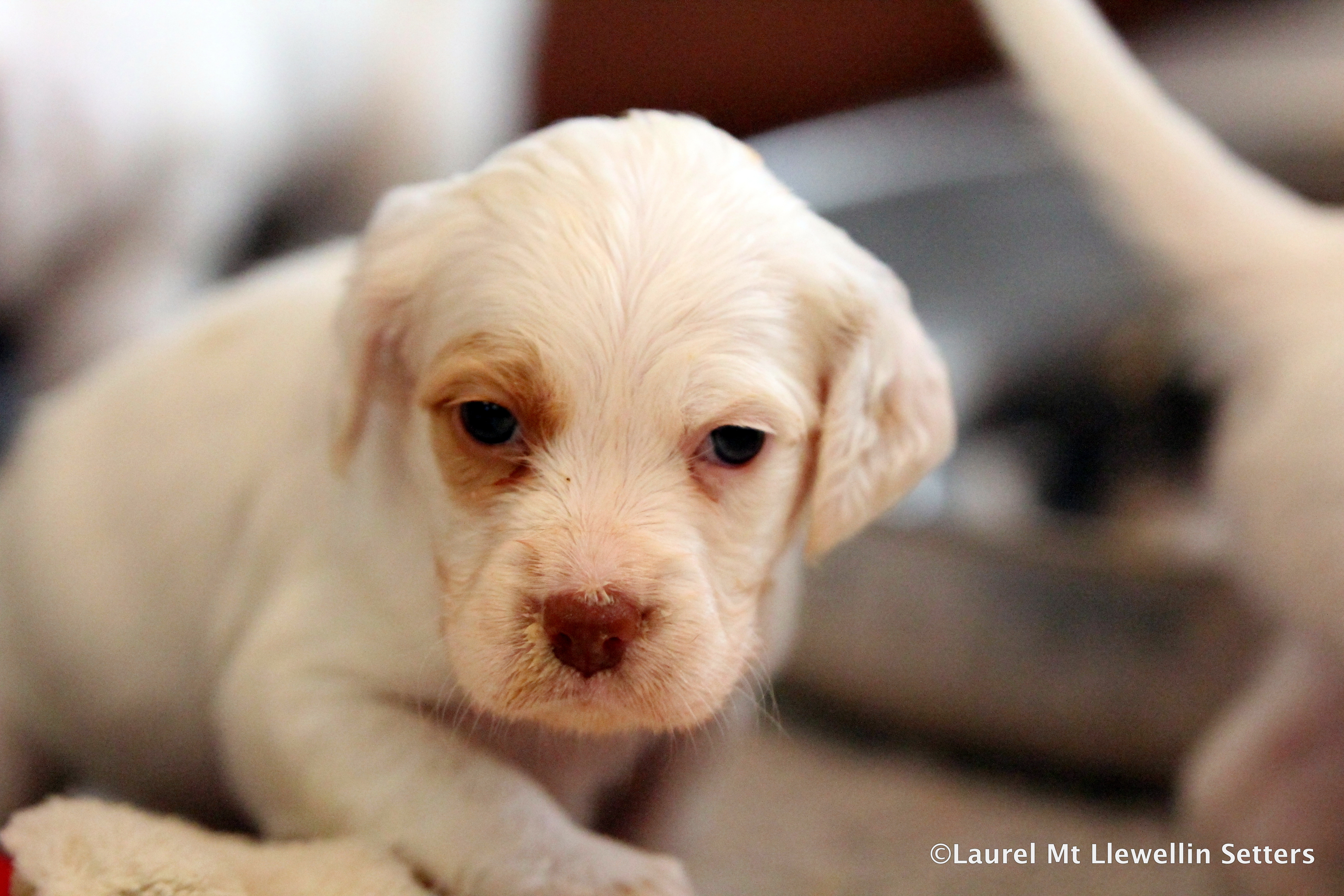 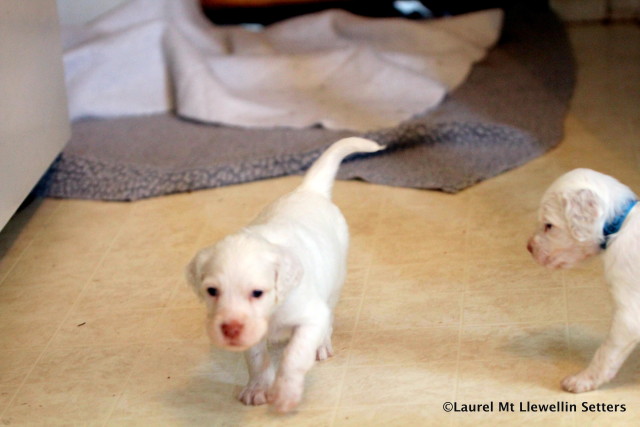 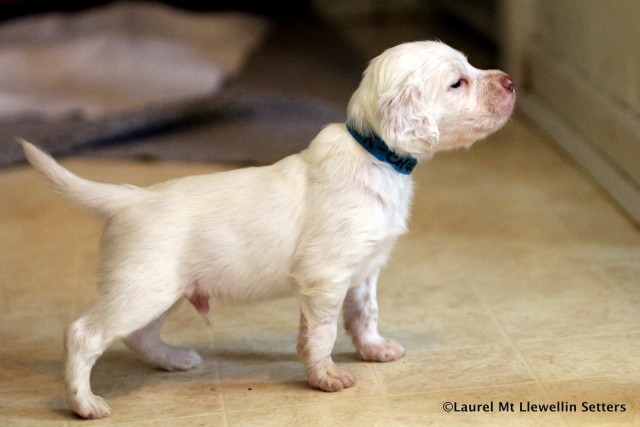 Today was the big move for Maddie’s puppies. After morning chores and a big play time outside with Orion, I got to work on disinfecting the kitchen, cleaning all the puppy beds, blankets, toys, crate, floor, walls, etc., and moved the wee babes in! There is usually more of a gradual transition to the kitchen for our pups. Usually pups are whelped in either of the adjacent rooms to the kitchen, but I wasn’t able to use the normal “whelping rooms” this time–the older pups were using them for access to outside for potty and the age difference is just too much to chance any mixing of the two litters–then they get to explore the kitchen several times before actually “moving in”. So, never seeing the kitchen and being moved in all at once was a bigger shock for them. They are doing fine, but I don’t like doing things this way at all. But, sometimes there is nothing I can do about it–all the best laid plans I may have had are mostly out of my control in this business.

What a day… what a week actually. I have no idea where it went! It was Sunday, then Thursday, and now it is Friday night? What?

Mum Gets Her Bedroom Back

Anyway, after getting everyone situated and somewhat happy and taking care of the other dogs, I went to work on getting my bed set up and my bedroom back. I’ve been on the sofa for over a month and I cannot wait to sleep in my bed tonight! 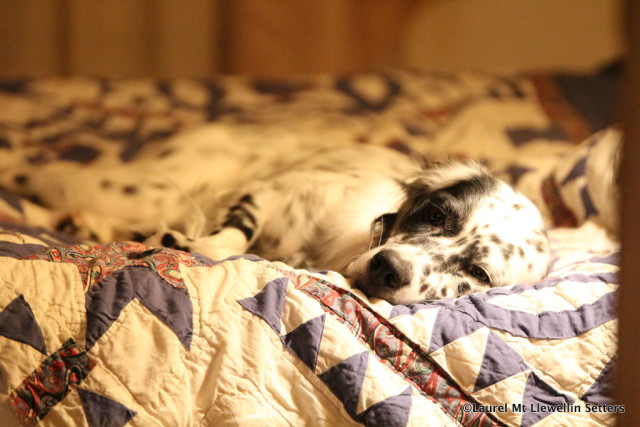 If I get to sleep in it…

The girls missed it too, I guess. 🙁

More play time outside for Orion and more learning about what the poor guy is not allowed to do, carefully balanced, of course, with lots of praise for being such a good boy… and we are all exhausted tonight. Orion had a great day and all has settled down. He is learning his boundaries with the girls and they are tolerating him better. He is going to the front door when he needs to “go” already. Nothing else lost to chewing this evening and he’s enjoying snoozing on the sofa beside me as I try to catch up on a few e-mails and get a little bit of “work” done. Which isn’t going so well. Knowing my bed is set up again and all ready for me is more than I can take! I’ll try to work tomorrow night after a good night’s sleep, right?

That’s all for now.